First there was the land and the river  – the Gila River, which flowed westward across south-central Arizona and the surprisingly fertile Sonoran Desert. Some 6,000 years ago, various cultural groups collectively labeled the Archaic peoples, who lived by hunting and gathering along the river’s banks and adjoining up land terrain, wandered into this realm.

Circa 300 B.C., these early inhabitants were joined by peoples from central Mexico, transformed by concepts and technology introduced from the south. From this merger arose the Huhugam people-our ancestors-who conducted trade over great distances and became superb farmers. Fed by waters of the Gila River, they constructed some 500 miles of large canals (on average 10 feet deep and 30 feet wide!) linked to smaller ditches, so watering thousands of acres of farmland. Transforming the desert into gardens, the Huhugam grew cotton for clothing, rugs and other textile products, and crops of corn, melons, beans, fruits, tobacco and other foods. They supplemented these crops with game, mesquite beans, agave, cactus fruit and other foods gathered locally from the wilds or in trade, enabling them to settle into large population centers. Here their arts flourished, including production of fine pottery and jewelry, the latter worked with imported shell and other materials. During the Huhugam’s “Classic Period” (circaA.D.1150-1450), this lifestyle apparently supported between 50,000 and 60,000 people, with some villages holding several thousand residents and containing large public buildings (formed largely of adobe), religious centers and sunken clay courts where an exciting, ritualistic ball game was played. But around A.D.1450, for unknown reasons, the urban centers were abandoned. Perhaps there was an extended drought, or pressures brought by the arrival of new Native peoples to the region -foremost the fierce, nomadic Apache-or a loss of public faith in leadership. At any rate, the Huhugam culture dispersed.

The missionaries converted many of our people to the Roman Catholic faith, and introduced new crops, cattle, horses, sheep and goats, and new technologies – which were quick to adapt to our own uses. But we were largely ignored, and life largely went on little changed, during the Spanish era and in the period following Mexico’s break from Spain 1821.The situation, however, took a radical turn in the next historical phase.

In 1846, southern Arizona fell under the influence of the United States following the Mexican-American War. In 1848, gold was discovered in California and tens of thousands of ill prepared men streamed across America heading toward dreams of riches. One of the primary routes was across southern Arizona. Between 1849 and 1851, an estimated 60,000 travelers arrived among our peaceful people, many starving or near death from dehydration and/or wounds inflicted in battle by the warring Apache to the east and the Yuman tribes to the west of our lands. Here the travelers rested and ate well, enjoying our bounty of wheat, corn, beans, pumpkins, watermelon, squash, peas and other foods. Indeed, one grateful member of the Mormon Battalion wrote in his journal in I846, en route from New Mexico to California to secure that state during the Mexican American War, “They are a noble race.” And wrote Lt. Sylvester Mowry in 1857, “Their stores of wheat and corn have supplied many a starved emigrant, and restored his broken down animals.”

We were also hospitable to other tribes as well. In the 1840s (though some sources suggest this occurred as early as the mid 1700s), the Akimel O’otham offered refuge to the Maricopa tribe, a Yuman tribal people who had been driven eastward from the lower Colorado River area by other Yuman tribes. The Maricopa, who called themselves the “Pee Posh,” settled in with the Akimel O’otham, and to this day we share the space and resources of the Gila River lands. In I854, the Gadsden Purchase officially made southern Arizona part of a United States Territory. In appreciation for the important role the Akimel O’otham played in America’s westward expansion, in 1859 Congress established the first reservation in Arizona, encompassing 372,000 acres along the Gila River. In 1862, putting our agricultural skills to work, our people grew more than one million pounds of wheat, most of which we sold. Our prospects looked good.

However, our lifeblood -Gila River water - was cut off in the 1870s and 1880s by construction of upstream diversion structures and dams by non-Native farmers, and our farming was largely wiped out. From 1880 to 1920 or so, we faced mass famine and starvation. The federal government stepped in and doled out canned and processed food by the ton. The change in diet proved disastrous, leading to extremely high rates of obesity and diabetes-a condition we still face today. With almost no jobs available on the reservation, and the loss of our cash crops, our people faced widespread poverty as well. Alcoholism raised its ugly head, and our people experienced the loss of certain cultural and artistic traditions and rituals. It was the darkest moment in our long history.

But, we proved resilient and eked out a marginal existence for several precarious decades. Conditions finally began to improve in the 1930s, when the U.S. government completed Coolidge Dam on the upper Gila River, creating the San Carlos Reservoir. The project included a canal and pipe system to deliver some of this lake water to our reservation, restoring a portion of our farming practices. This was the beginning of a long climb out of the economic trenches. Men began to find work off the reservation following World War I and World War II as the introduction of cars made travel to booming Phoenix possible. Eventually, small businesses began to appear on the reservation as well, launched both by the community and individual tribal members. Schools, health centers and new housing appeared. Income levels slowly grew and famine was erased. These trends continue today as the Gila River Indian Community looks toward a promising future.

Since before the arrival of the Bearded Ones (Spanish) the waters of the Gila River has provided for the Akimel O’otham. The Spanish gave these desert farmers a name which is still used today PIMA.

The O’otham were here in village clusters and had a well defined irrigation system in place. The O’otham had crops of corn, beans and squash, grown in abundance. These were the food crops but they also found cotton and tobacco being cultivated.

The Spanish found these people diverting the waters of the Gila into canals they had constructed, with the aid of only wood and stone tools, which extended for miles and miles. Their engineering ability was amazing to these new arrivals. From the larger canals they had head gate to divert waters to the actual field of crops. It was a combined effort with each village responsible for the maintenance of the canal system to their fields and village. Field houses were often put up near the fields but home was in the main village.

The O’otham people are a peaceful group and worked together on large scale projects. For instance, in the rebuilding of a house which was lost by fi re, the village would rebuild it in a matter of days. Materials would be gathered such as posts and beams for the roof and corners, arrow weeds obtained from the banks of the river. Labor was from the village and food was provided for the noon lunch. There was no monetary exchange but food was donated by the families and the ladies did the cooking. Not only did they do the cooking but also helped in the actual house or structure construction.

Irrigation continued and there came a time when the Pee Posh came to the valley seeking refuge from their fellow people. Part of the Yuman groups along the Colorado they came East to ask permission to live among the Akimel O’otham. They were welcomed and allowed to live and farm in what is now District Seven. Today they still coexist and therefore the name for the irrigation Project of today, the Pima-Maricopa Irrigation Project.

There came a time in the 1800’s when the people who were so generous with their crops to the people crossing their lands to California began to see changes in the river flow. A good number of the settlers stayed in the upper Gila River Valley and began to use the waters, which affected the flow downstream. Due to their diversion upstream the waters finally stopped flowing down in the lower valley where the O’otham and Pee-Posh lived. This major event forced some of the people to migrate to the Salt River Valley only to suffer the same fate, the eventual loss of water.

Today the people who now reside within the reservation of the Gila River Indian Community the Pima and Maricopa are in the planning stages of an irrigation project of monumental proportions. The plans are to establish an irrigation system to deliver water to 146,300 acres. From District 1 in the Blackwater area to the farms of the Pee-Posh in District Seven. It will again take the effort of all the people to make major decisions, just like in the old days. There will be impacts to the community members in many ways and they will all have to be addressed. It will take years to complete but in the end the community members will once again hear the sweet music of rushing water. 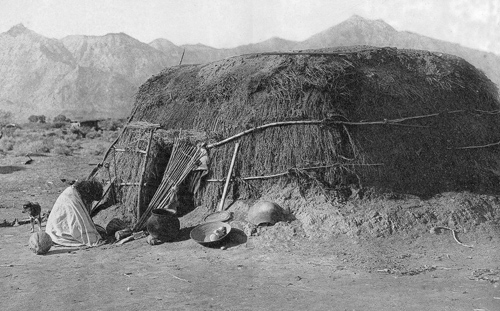 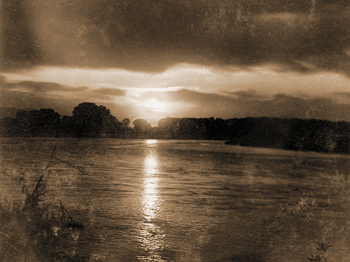 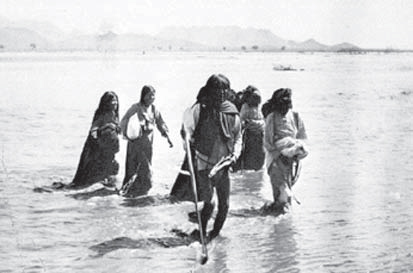