If the level of a people’s arts and cultural activity is an accurate reflection of their overall state of vitality, it is encouraging to note a renaissance of both traditional and innovative arts, crafts, and cultural pursuits among our Gila River community. Historically, the Akimel O’otham and Tohono O’odham were some of the world’s premier basketmakers, and the Tohono O’odham remain very active in this field. Among the Akimel O’otham, basket weaving is an art undergoing revival. In addition, culturual gatherings and special arts events are growing larger, and more tribal members are making a living, or supplementing their income, through the sale of arts and crafts. And, in January 2004, the community dedicated one of the nation’s finest facilities for the preservation and display of Native artifacts, the Huhugam Heritage Center.

The Maricopa people were small bands living along the lower Gila and Colorado rivers. Each of these bands migrated eastward at different times. The Xalychidom (Maricopa of Lehi), left around 1825-1830. The last of these bands is said to have left the Colorado River in the late 1830’s. Eventually these bands came together and became collectively known as the Maricopa. As they migrated eastward, they came upon the Pima tribe and established a relationship. Both tribes provided protection against the Yuman and Apache tribes.

Some Maricopa’s (mostly Xalychidom Piipaash) began migrating to the area now known as Lehi on the Salt River Pima-Maricopa Indian Community, because water from the Gila River was becoming scarce. When the Salt River Indian Community was established in 1879, the reservation included both tribes within these boundaries. The Maricopa Tribe is known for their red clay pottery work. Various jars and bowls were created for essential needs, made of natural materials. The clay was collected at various locations within the area. Natural dyes were used to depict geometrical designs. Maricopa pottery artwork can be viewed at the Community’s Hoohoogam Ki Museum. 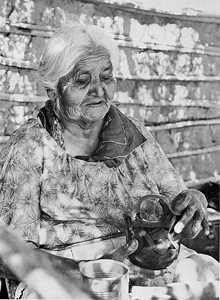