Since before the arrival of the Bearded Ones (Spanish) the waters of the Gila River has provided for the Akimel O’otham.The Spanish gave these desert farmers a name which is still used today PIMA.

The O’otham were here in village clusters and had a well defi ned irrigation system in place. The O’otham had crops of corn, beans and squash, grown in abundance. These were the food crops but they also found cotton and tobacco being cultivated.

The Spanish found these people diverting the waters of the Gila into canals they had constructed, with the aid of only wood and stone tools, which extended for miles and miles. Their engineering ability was amazing to these new arrivals. From the larger canals they had headgate to divert waters to the actual field of crops. It was a combined effort with each village responsible for the maintenance of the canal system to their fields and village. Field houses were often put up near the fields but home was in the main village.

The O’otham people are a peaceful group and worked together on large scale projects. For instance, in the rebuilding of a house which was lost by fi re, the village would rebuild it in a matter of days. Materials would be gathered such as posts and beams for the roof and corners, arrowweeds obtained from the banks of the river. Labor was from the village and food was provided for the noon lunch. There was no monetary exchange but food was donated by the families and the ladies did the cooking. Not only did they do the cooking but also helped in the actual house or structure construction.

Irrigation continued and there came a time when the Pee-Posh came to the valley seeking refuge from their fellow people. Part of the Yuman groups along the Colorado they came East to ask permission to live among the Akimel O’otham. They were welcomed and allowed to live and farm in what is now District Seven. Today they still coexist and therefor the name for the irrigation Project of today, the Pima-Maricopa Irrigation Project.

There came a time in the 1800’s when the people who were so generous with their crops to the people crossing their lands to California began to see changes in the river flow. A good number of the settlers stayed in the upper Gila River Valley and began to use the waters, which affected the flow downstream. Due to their diversion upstream the waters fi nally stopped fl owing down in the lower valley where the O’otham and Pee-Posh lived. This major event forced some of the people to migrate to the Salt River Valley only to suffer the same fate, the eventual loss of water.

Today the people who now reside within the reservation of the Gila River Indian Community the Pima and Maricopas, are in the planning stages of an irrigation project of monumental proportions. The plans are to establish an irrigation system to deliver water to 146,300 acres. From District 1 in the Blackwater area to the farms of the Pee-Posh in District Seven. It will again take the effort of all the people to make major decisions, just like in the old days. There will be impacts to the community members in many ways and they will all have to be addressed. It will take years to complete but in the end the community members will once again hear the sweet music of rushing water. 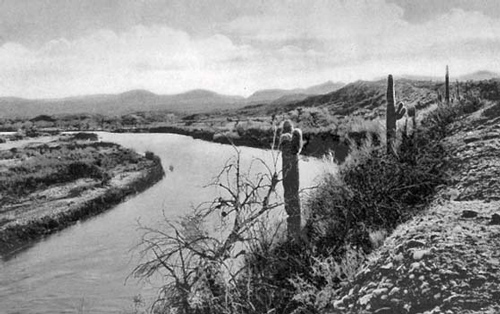